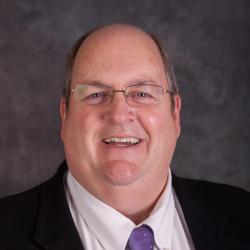 Terry Dougherty currently provides executive oversight for UHealthSolutions. Mr. Dougherty’s impressive career has traversed both the public and private sectors. Before joining UMass Medical School, he served a dual role as assistant secretary for Administration and Operations at the Massachusetts Executive Office of Health and Human Services and as director of the state’s Medicaid program, MassHealth. He previously had served as the deputy budget director and as manager of Acute Hospital Services within the Division of Medical Assistance.

Prior to his tenure with the Executive Office of Health and Human Services, Mr. Dougherty was vice president for Payer Relations and Managed Care for the Caritas Christi Health Care System (now Steward Health Care). In this role, he had oversight responsibility for a $900 million net revenue budget for a six-hospital health care delivery network and community network of 1,600 physicians, and also was responsible for all advocacy efforts with federal, state, and local governments and regulatory agencies. From 2001 to 2004, Mr. Dougherty served as director of Government Finance at Children’s Hospital, where he advised executive management on a host of issues, ranging from state budget advocacy efforts to uncompensated care pool reform and Medicaid reimbursement. He has extensive experience with managed care models, having negotiated and achieved results for at-risk populations at both Caritas Christi Health Care System and Children’s Hospital. At MassHealth, Mr. Dougherty set the services, quality metrics and rates for 1.4 million MassHealth members.

Mr. Dougherty led the successful development of Boston MedFlight from 1986 to 1998, growing the organization from a start-up idea to one of the country’s most clinically and financially successful air medical transport organizations. With an early focus on safety and clinical appropriateness, Boston MedFlight has set many of the standards endorsed by national accreditation bodies.

He began his professional career with the Massachusetts Hospital Association, focusing on regional planning, new technologies, and payment systems.

He received his master’s degree in public health from the Boston University School of Medicine, and his bachelor’s degree in civil engineering from Wentworth Institute of Technology.